Summer and that Damn Cuckoo (Kokinshuu)

I decided to translate a series of summer poems from the Kokinshuu (135-150). I said before that Ki no Tsurayuki did not only choose poems based on their individual quality but on how they would fit in a series. I was originally planning to release the whole 32 poem series but it was taking too long so this is only half of the summer poem section.
The first thing you'll probably think reading through it is "Why are there so many damn cuckoos?" Yeah I felt the same way and it is unfortunate that hototogisu only translates to cuckoo since I don't know about you but every time I hear the word cuckoo I think of those annoying clocks. The cuckoo is however an important poetic image and device in the Japanese poetic tradition and also it fits well with these kind of Japanese poems called tanka. Tanka follow a 5-7-5-7-7 syllable structure and hotogisu being five syllables works well. The cuckoo is a migratory bird that arrives in Japan in mid-May and so is the harbinger of summer for a lot of Japanese. Here is a picture of it courtesy of this website. 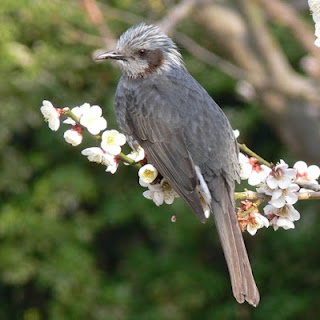 It's song is quite sad and you can hear it here on the Japanese Wikipedia site. Just scroll down and it is on the right side. The cuckoo is a nice poetic image and can be used as a metaphor for a lot of different things but mainly it is supposed to provoke sadness. The orange blossom is also a standard poetic tool for Japanese poets when referring to summer with not much significance that I'm aware of aside from the fact it blooms in summer.
Old Japanese poetry from Heian period was usually seasonal and unfortunately summer is by far not the most interesting season and I don't think that many summer poems have made it to special notoriety. You will notice that most of the poems have anonymous authors which implies that either the poets were not well known or did not want to put their name to the poem. Compare this with the autumn or spring sections which are full of famous poets of that time period. I wanted to translate these poems because, well it is summer now and I thought I could find some nice poems hidden beneath all the cuckoos. In the next few days I am going to write a new post with some analysis about some individual poems.
This section in particular does have a clear chronological pattern. The first five poems represent that time in between spring and summer when it is still ambiguous and then the last ten are clearly in summer. It is interesting that almost all of these poems are sad and depressing. This goes against my instinct being an American kid growing up and looking forward to summer all year. Why was summer so depressing for Japanese poets back then? It's a good question of which I don't have a good answer aside from that summer does lack the nice poetic images like blooming cherry blossoms or crimson leaves.
I hope you can enjoy the poems and the pictures are from the summer I spent in Japan. I should also note that to aid me with these translations I referred to this website to help me get my head around the poem as well as the book I am using has some explanations about the poems but it's all in Japanese.

In my garden,
Another wave of wisteria
Has come to bloom.
Cuckoos of the mountain
When you will grace us with your song?

Alas! How moving…
These words of praise
I wish to say of everything.
Spring is passing
Is this the only cherry in bloom?

Waiting for the fifth month,
Cuckoos from the mountains
Beat your wings!
Already I want to hear your song,
The song I remember…

When the fifth month arrives
The songs of the cuckoo
Will also have matured.
I wish I could hear the cuckoo’s song
Young and full of innocence.

Awaiting the fifth month,
When the fragrance
Of the orange blossom reaches me
I can smell the perfumed sleeves of
Someone dear, someone from the past.

I hobble along this mountain path,
The songs of the cuckoo
Are now reaching my ears.
Is it true? Are we in the midst
Of the fifth month already?

This morning I could hear
The cuckoo’s song.
You seem to be travelling,
I would love to offer you lodging
In my orange blossom tree.

This morning, as we pass through
The Otowa Mountains,
Far away, among the tree tops
There’s a cuckoo.
Its song reaches my ears.

Composed after hearing the first cuckoo of the season,

The cuckoo,
Upon hearing its first song,
With no one around,
I feel in vain
The pangs of love.

Iso no Kami,
The ancient capital.
The song of the cuckoo,
It is the only thing,
That has not changed…

In the summery mountains,
The sad songs of the cuckoo…
If you had a heart,
You would know that your song
Stirs painful memories in me.

The sad song of the cuckoo
When its voice reaches my ears
I think of my hometown,
The people of my past,
And I miss them deeply.

Oh cuckoo,
Your moving song is heard
In village after village,
I can hardly bear it,
I miss you and think of you always.

When I think of the cuckoo
Of Tokiwa mountain
How you strain your crimson tongue,
It makes me cry with you.

Cuckoo, I hear your sad song,
But I cannot see your tears.
My sleeves are soaked through,
Please borrow them
And share my grief.

Cuckoos from the foot wearying mountains!
You never cease trying
To surpass one another
With the saddest song
Soaked with grief from the past.