Ariwara no Narihira: The Flirtatious Philosopher

For this post I decided to write about the legendary Ariwara no Narihira. He predates all of the poets I've already mentioned in this blog, he lived 825-880 A.D. Most of what we know about Narihira comes from the Tales of Ise which are supposedly based off his exploits. The Tales of Ise are about a young man (Narihira) who has various romantic excursions with aristocratic women. Like most sources from this time period, the distinction between fact and fiction is hazy. He was also supposedly an inspiration for Murasaki Shikibu's Genji in the Tale of Genji who was also a ladies man in that traditional, aristocratic Japanese way. Perhaps it's better if we let Narihira exist partially in fact and partially in our imagination. His poetry can speak for itself.

Narihira wrote a lot of poetry and Ki no Tsurayuki chose over thirty of his poems for the Kokinshuu. He deals with the old themes such as the transience of cherry blossoms or the pain and pleasure of love and passion. His poetry is interesting because it's quite introspective and intellectual and he reworked some old poetic imagery. He is one of the "founding fathers" of classical Japanese poetry and set the bar for poets following him.

In this selection the first three poems consist of two from anonymous poets with a Narihira poem in between. I thought they flowed nicely together. The last two poems are by Ariwara no Narihira. The first one was written shortly before his death and the last one is his most famous poem. All of these are my translations.
Enjoy!

Nothing will be left
All scattered...gone, how nice for
Those cherry blossoms.
For in this world of ours
The end is bitter and hateful.

I like this poem because the transient image of the cherry blossom has been turned on its head. The usual poetic convention is to lament the scattering of cherry blossoms but this poet, apparently bitter about old age, envies the ephemeral existence of the lovely flowers.

If cherry blossoms
One day ceased to exist
In this world of ours,
Perhaps our hearts in spring
May know some tranquility.

This poem also took the cherry blossom image and reworked it. This is one of the introspective poems of Narihira. He's using the cherry blossoms as a metaphor for his amorous affairs. Although they are pleasurable and beautiful, the ephemeral nature of them probably causes more harm than good.

The mists of spring
Linger over the mountain,
Those cherry blossoms,
When the spring haze has lifted,
Their color will also change.

I’ve heard countless times
About the last path we walk
Our conclusion.
When will it come? I wait anxiously,
I didn't believe I’d come to this... 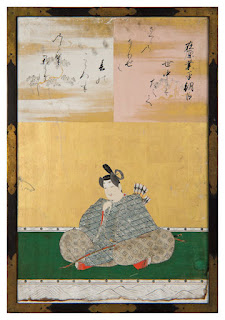 It is not the moon,
This spring is not the same spring
As the one’s before,
Only this body of mine
Is the body it’s always been.

This is Narihira's most famous poem. The context of it is that a woman he was sleeping with the year before was forced to cut off their relationship and he is lamenting this romantic impasse. There are myriad translations of this poem. If you look at the Japanese, it could be translated as "Is this not the moon?" and "Is this not the spring of the past?". The Japanese remains ambiguous whether or not the first three lines are negative questions or negative statements. Most translations I've read convey them as questions but I decided to translate them as statements because the last two lines are pretty unambiguous in meaning: "Only this body of mine is the same body it's always been." In that context, I think it makes sense to contrast the moon and spring which are never quite the same with his static existence. This goes well with the overall theme that he is the same man he was, but she won't see him anymore.
Posted by Philippe at 10:05 AM