Kyōgoku Tamekane ( also known as Fujiwara no Tamekane) lived from 1254 to 1332 A.D. He was the grandson of Fujiwara no Teika and had a very strong personality. His life was tumultuous and lived a big chunk of his life in exile.
After the death of his grandfather, there was a split between his followers. Some considered Teika’s later, more conservative years to be the ones to emulate. They were known as the Nijō faction.
Kyōgoku Tamekane and his supporters felt that Teika’s earlier, more rebellious years were superior. In the end, the Nijō faction won out because of their political connections, and they controlled the content of the final ten imperial poetic anthologies.
Kyōgoku Tamekane was pushed to the margins, but he never gave up his belief that he was right. He suffered because of his irascibility and stubbornness (namely, exile), but his poetry is considered by most later scholars to be superior to the conservative Nijō faction. He was a sensitive and emotional man. His poetry reflects his love of natural beauty, and he liked to couple natural scenes with human sentimentality. His poetry was influential but not as respected as it should have been due to his refusal to back down to his more powerful adversaries. Overall, I consider him a kick-ass waka poet.

Glowing bright crimson,
Those plum blossoms intrigue me.
Bending and yielding,
The willow sways back and forth
In the evening spring showers.

This poem contains only natural imagery and he leaves the emotional content to the imagination. 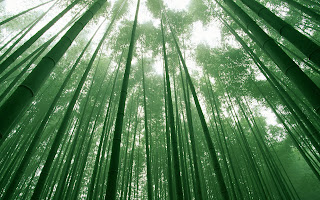 Drops of dawn sunshine
Leak through branches above,
Yet, only a few.
Such a profound coolness here...
Lost in the bamboo thicket.

This is one of those poems that refreshes me, and lets me imagine myself relaxing underneath bamboo trees.

The waning sunlight
Is reflected in the waves,
There’s a silhouette,
But, that far away island
Has been engulfed in darkness.

As the evening sun
Sinks ever so slowly,
In the distance
Yet another lonely peak
Appears in the hazy hills.

In my loneliness
Sentiments of love appear
Only for a moment,
The pines rustle in the wind
Under the pinkish sky.

I like this poem because there is no obvious connection between the two parts. I like how he combines a natural scene with a fleeting emotion.
Posted by Philippe at 5:59 PM